The Favor of the Lord.

--Proverbs 12:2--
"A good man obtains favor from the Lord, but the Lord condems a crafty man." 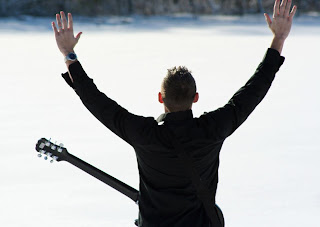 My husband walked in the door today wearing his new goverment ID. For the first time in 4 years it is not a military ID that he has to carry around, but it is something that he can be just as proud of. He is now wearing a post office ID tag. I am SO proud of this man!!!
Today when I was thinking of how God has touched our lives in the last few months, I was literally left speechless. When Daniel got home in August, we were due to have Braden just a few weeks later. The Dr. induced me on the 5th and Daniel was supposed to start his job at the Jr. High on the 15th. God's timing was amazing. He applied for a corrections officer's job at the jail shortly after he began at the jr. high and the same day that he heard of someone else being hired for that position was the day that his dad called to tell him of the opening at the post office. Again, God's timing was perfect! He began to get very burnt out of being a janitor a few weeks ago and when he expressed this to me, I told him to put in his two weeks because surely we would be hearing about the post office soon. His two weeks were up on Friday of last week and on Thursday night we received the letter saying that he would start training on Tuesday of this week. Could God's timing be any more miraculous??
I know that we have found favor in the eyes of the Lord because of our diligence to persistantly obey Him, follow Him and trust Him. Our prayers were heard and daily I see the evidence that there is a true and living God who is concerned with the perfect timing in our lives. He cares about the finest details and the strongest battles. We have surely found favor in our Lord and my heart is bursting with Love for my savior! Our family is taken care of, my Lord provides by giving my husband a job that also provides! I am so proud of Daniel and so thankful to God!!!Thank God for His favor. What a loving God.
Posted by rameelin at 6:49 PM

Of Pandas and Pirates said...

Congratulations to Daniel on the new job! That's wonderful news!