Daniel had his second interview for the Correction's Officer position last night at 5 pm. He called at 5:30 with such excitement in his voice! But let me back up.
Before he left last night, as I almost always do in a situation like this, I put my hands around his neck and began to pray over my husband. I prayed that the Lord would give him the perfect words to say and they would flow from his mouth into the ears of the men interviewing him as a sweet sound. I prayed that the men's hearts would be softened to Daniel's spirit if this was indeed the will of God for our lives. I prayed that the Lord would give him peace and set him apart and that the interviewers would recognize something unique and different about this man, my husband.

So he calls me when I'm on the way out to my mom's with the kids. He begins to explain to me the kinds of things they asked him and how he responded. They asked him to tell them a little about himself. He said that he started by telling them that he is a Christian man and that the Lord is the center of everything that he does. That he has been praying for direction from God for his career and his life and that the Lord has brought him to this exact place at this exact time. (Daniel is called to be a preacher from the Lord himself so I know that he probably went on for a little while at this point...haha...) He said that in the middle of him talking one of the men smiled and said "We just have to stop you right here and now. We have interviewed alot of men and not one of them has talked about their faith in the way that you do. Sitting in front of you are 3 Christian men and at this point you are in a really good place with us."

He was elated! He said the rest of the interview went well and felt natural. He told me that they even joked and cut up a little during the next few minutes. We are not sure when we will hear anything but he feels like he made an impression that is lasting with them so if the Lord shuts the door at this point, we will know that it is God doing it without a doubt because Daniel feels confident that the position could be his. So that's exciting and either way we are still praying for the Lord to do the work!

Daniel had the day off yesterday so we took Nora and Braden to eat at Monical's. While Nora was eating her pizza she randomly said "mom I want a sausage biscuit." I said "They dont have sausage biscuits here, babe." Daniel asked her, "What made you think of that Nora?" To which she replied "mmph. Don't worry about it dad!"
-------------------------------------
While eating a BIG, scary looking man with a dark beard and glasses walked in. Nora didnt see him until half way through lunch when she turned around with a breadstick in her hand. She scrunched up her shoulders, looked at me concerned and said, "There's a monster in this place mom!"
(of course I explained otherwise but giggled at her sweet innocence.)
----------------------------------------
I'm going to be getting a lap top at some point in time. I'm thrilled because I truly think that I will begin writing my (first) book if that's the case. I'll let you know when that happens since you're all so anxious to read it someday. ;)
And here it is. Today's recipe to try!
Quick, Easy and wonderfully good!
As always, please let me know if you do indeed try it and for the first time ever if you take a picture of your meal, your family eating the meal, etc along with the sides you chose, you could be the winner of a fantastic prize sent to you directly from me because I love you! :) I'll decide which picture I enjoy the most and which dish looks the most delish!
So email me your pictures at rameelin@mail.com and enjoy!
Easy Chicken Cordon Bleu 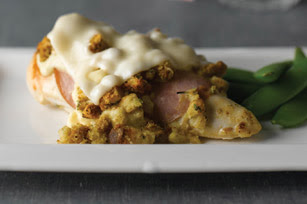 oo can I have the recipe for your peanut butter cake bars..they sound SUPER yummy