He was my best friend.
On December 28th, 2004 I married him.
We had both just turned 20 years old.
We had been dating for 4 years to the date (minus some teenage breakups.)
He had been a Marine for one year and 2 months.
I was working as a special ed teacher's aide.
He was not living here.
I wished I was anywhere that he was.
My parents weren't initially happy with our decision to marry. 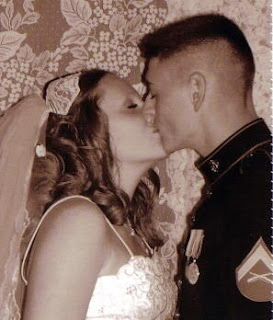 Daniel was home for his Christmas leave for only 10 days.
2 weeks before he was coming, I sprang in on my parents that we were going to get married while he was home. I wanted a small celebration, if you will. It turned out to be one of the biggest weddings I have seen. It was on a Tuesday night at 6 pm, and the church was packed. It was the last wedding that Pastor Billy Bell performed before he went to Heaven, which is still very special to my heart today.

My sister stood up with me, and Daniel's brother Mike stood beside him. Jake was the ring bearer. My sister wore an old prom dress and the boys wore dress pants with shirts and ties. Our ushers were good friend's of both Daniel & I. Nanny was there and my most favorite picture that I own is the one of her hugging me at my wedding. It is framed on my dresser and I see it everyday. My dad gave me away. My mom looked stunning in a sparkling blue shirt.

We didn't have a honeymoon. There was just no time. After all, Daniel left 2 days after the wedding to return to base in Jacksonville, North Carolina-the place we would soon call "home" together. (It was never home.)

We drove to Peoria at almost 11 pm at night to stay in a hotel. It was an hour drive, and we were exhausted. We both wish that we would have never gone. We literally fell asleep, woke up and drove back home. We just couldn't believe we were married.

Daniel was deploying a few months later. So after the wedding, our lives went basically back to "normal." He was gone. I was home. We were preparing our lives together, only separately. He was going to leave in March for 6 months and I spent that time preparing to meet him in North Carolina with the majority of our things and set up house. He returned in September of 2005.

Despite the challenges that we knew we were going to face in our marriage over the next few years, we were determined to make it work. We loved one another deeply and I respected him in a very unique way. We had grow up together in our relationship and changed in so many ways. We said traditional vows, but the most important promise we ever made to one another was this:
Being without one another, by choice, is never an option.
Separation, Divorce...these are words that have never entered our vocabulary.
We are committed to the call of this marriage and all that comes with making it work...
No Matter What.

...and sometimes that has not been easy, let's just be honest.
In 5 years, Daniel deployed to war twice. He left behind his new wife to defend his country. In the first year of marriage, I saw him for 3 months total. I was left at home to deal with finances, paying bills, working, worrying about my young husband and not really feeling married.
I missed him terribly.
***
In 5 years of marriage, we have had 2 children and another blessing is on the way! If you think having young children in a young marriage is easy just because it is common--think again. It is a challenge and although we enjoy that challenge deeply, it is sometimes (often) a struggle to maintain a strong and healthy marriage in the midst of screaming babies.
***
In 5 years of marriage we moved 3 times. Once to North Carolina. Once back home. And lastly to our current home.
***
In our 5 years of marriage, we have fought more than you can imagine.
We have experienced loss so deeply that we didn't know if we would survive.
We have grown spiritually, and fallen spiritually.
We have made friends, and lost friends.
We have been active in the ministry and taken a step back from the ministry.
Did I mention we have fought? Alot?
Ah, yes. I did.
We have made financial decisions that have blessed us greatly!
We have laughed, cried and laughed some more at this life that is ours.
***
In 5 years of marriage, we have experienced things that other young couples will never have. We have grown stronger because of it, I believe. We have boxes of hand-written love letters from our time apart. Boxes that have molded our marriage. We have memories of love so deep nothing was going to tear it apart.
***
In these 5 years of marriage, no matter how tough it got, we never walked away. We never turned out head or gave up in the midst of a current struggle. We bonded together. We have remained a team. Focused on the goal...
...And our goal has always been and always will be to glorify God in this marriage.
After all, according to the Word, a marriage is the greatest relationship we can ever gain on this earth. So great, in fact, that the enemy tries everything in his power to rip it apart.
He lies, cheats, lusts, hates, angers, frustrates, annoys, and kills to separate that which the Lord has bound together. That is why we are determined to never let that happen. We are one, according to God. One in spirit and mind. There is just nothing greater.
He is still my best friend today.
I respect him even more than I did 5 years ago.
He is a great father to our children.
He is a wonderful provider.
He loves the Lord with his whole heart and seeks after Him with wisdom.
He has proven his love to me time and time again.
He has never walked away, either; my other half.
He has remained strong, faithful and focused.
The best 5 years of my life, by far.
Happy Anniversary, Babe.
I love you more today than yesterday.

This really hastouched my heart, my husband said he hates fights, but i love them more than leaving, because when you stay and "fight" you get things out, and work things out more than you would if you didn't say a word and just left, thank God, he's never EVER left. AMEN to your marriages, to both our marriages I: pray we are FIREPROOF!!!
:)