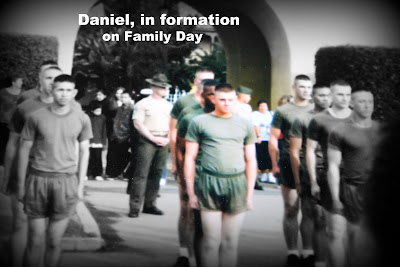 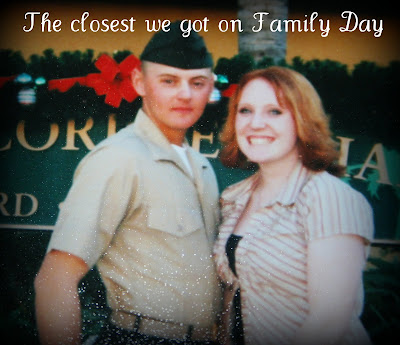 On the following day, when I knew it was time to pick Daniel up and leave the base with him, I felt a little more at ease. I had cried and shared my fears with friends and family the night before, but I especially clung to the Lord; asking for His help and guidance. I begged with God to confirm to me that this man was still going to be my husband and that he still wanted to be. I prayed that at some point during the few moments we would have alone together that Daniel we be broken. And not broken like he had been in the past 3 months. The correct word for that is probably 'traumatized.' I wanted to see him broken for me and broken for the Lord.
I don't remember much about the long ceremony. It was cool at first and then got increasingly warm outside as the day went on. We were there for what seemed like hours. Afterwards, Daniel ran through the crowd, past his mom and dad and directly to me. He hugged me and hugged me, but still no kiss. Although that moment most certainly was like something out of a movie in my mind, because I remember it vividly (or maybe more romantic than it was.) Either way I like the memory that I have (or I have created.) We spent time meeting friends and drill instructors. I impatiently waited to grab his bags and get off of that base. I felt imprisoned so I can only imagine how he felt. We sat in the back of the car, holding hands as I listened quietly to every word he had to say, seeing if I could recognize him. In moments, I most certainly did. He seemed more relaxed this day. It was no longer a projection of this Marine he was 'supposed' to be. It was going to take time, but he would figure himself out again. He was tucked in there somewhere.
I'm not sure what happened next. Maybe sightseeing. I know for sure we had a meal at some point in which Daniel ate faster than anything I had ever seen. It made me nervous and a little scared. He was going to have to be completely re-trained for the civilian world. I felt like I would be nurturing an infant. In a way, I would be. The rest of the day is a blur. I remember a few key parts....
1.) We left the hotel alone and walked to a convenient store. We walked by some Marines and Daniel immediately let go of my hand. I finally confronted him and made it clear that at some point in the 4 years that he was going to be a Marine, he would have to hold my hand.
2.) We were alone in the hotel room for a little while and went through some things I had brought to show him. He teared up a little and I held him closely. He was so alone and out of himself. It was a sad moment for me.
3.) And the greatest moment of all for me? He had to do laundry. We had yet to kiss at all up until this point so I was just dying for longer than 2 minutes alone. We went to the outside laundry room of the hotel. It was in a hallway but was open on both ends. I sat on the dryer and Daniel was leaning against the wall in front of me. We were laughing and talking. We had missed each other so much, but it was as if we were a teenage couple who had no idea of the other wanted to be kissed. Finally, in a moment that seemed safe, I got down and walked to him. He embraced me so tightly, as if reassuring me that things truly were ok. He was himself, it was just going to take time. As I looked up at him, I remember feeling excited and nervous. Did I really want to kiss this man who had been so badly broken? He was tainted to the things of the Lord and at this point, I didn't even know where he stood in his walk. I didn't know alot of things, but what I did know was that my love for him had not changed. Nothing in my life, other than him being away, had changed. I was steadfast, patient and had endured 13 weeks without him. I loved him just the same and was going to stand by him, no matter what it took.
He leaned his head down slightly and I met him halfway. It was a "dock of the lake" moment as our lips met and I burst into sudden tears. He cried too as he rubbed my cheek. Before we knew it, we were both laughing hysterically. It was as if the dam had broken and the river of our built up emotions had finally came rushing through. It was a freedom and an escape. His lips felt the same; yet different. But I knew it wouldn't be long before I recognized every part of him again. He was ok. I was ok. We were going to be ok.


We made the long trip back to Illinois for some time with family during his 2 weeks of leave. He was incredibly handsome, and proud. I stood by him as we experienced a couple rough moments of disagreements and readjustments. Mostly, it was amazing just to have him home. This was the beginning of all of our future goodbyes. 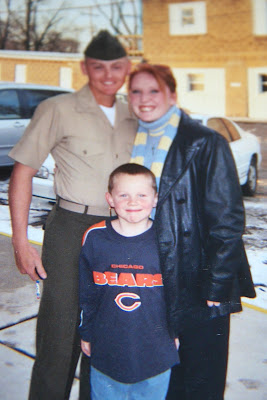 The next year was a whirlwind in our relationship. It was a combination of long distance, shady behavior, planning of our future while planning a deployment, terrible fights, one bad breakup, weekend visits home and clinging to hope that we would make it through. I would love to go into detail about this year, but again, someday I will do so. Read my book;)
Mostly Daniel sent pictures, by mail, of himself in faraway places... 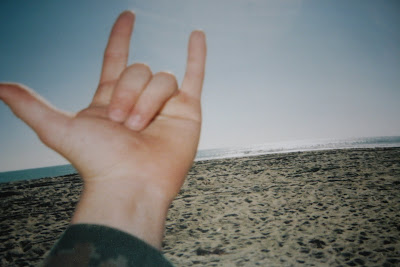 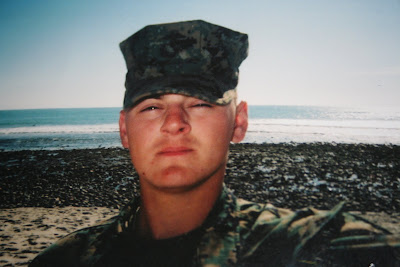 ...which left me in tears and shaking in my bedroom. How could he be so far? I would hold his picture, touch his face and cry over the loss I was experiencing.
We spent alot of time on the phone.
Mostly arguing. 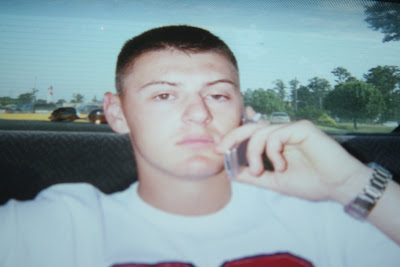 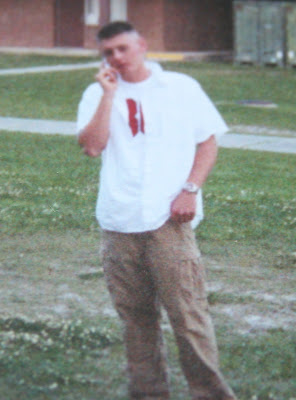 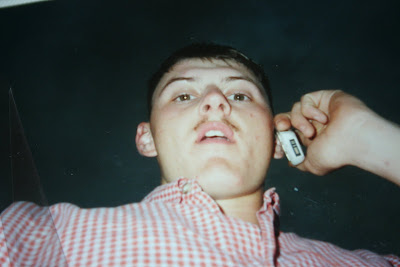 And more fighting.
We fought so hard, and so deep for a solid year. We said things to each other and in front of people that we never should have said. We were loud, passionate, mean, and so hardened to the love for one another that we once had. It was the longest and most difficult time in my life.
But it was also a wonderful time in my life. I had stopped my classes at the Christian college because I was offered a job at a local elementary school. I was a teacher's aide in a K-2nd grade special ed. classroom. It was thrilling and challenging. I loved going to work everyday and it took my mind off of the awful fight I had just had the night before, or even that morning. Daniel wouldn't answer his phone, or he would hang up on me. He did things that we still don't talk about. Things that were hurtful beyond acknowledgment. In other relationships, they may have been normal, but in mine--we were supposed to be on fire for God. We were supposed to be pleasing to Him and living for Him. Seeking & trusting Him. It was all so hurtful and confusing. Of course, Daniel was surrounded by men who were lost and misled as well. None of them had any direction and without a vehicle at the time, he was mostly limited to his choice of churches on base. It was far too much of a burden for me to carry. I tried, but I was failing.
After a short, but terrible breakup in the summer of 2004, Daniel & I talked about getting married. We had to be together. Separation and long distance were tearing us apart. Of course my parents were devastated and quite honestly, against us getting married, and for good reason. We seemed unstable and thought that being together would fix every problem we had. I knew in my heart we were going to have to marry at some point during his time in the Marine Corps. I knew that he would be deploying at the beginning of the next year. I wanted so badly to figure things out and make them work. So at the beginning of December, I brought it up to my parents once again. We were going to be married when Daniel was home for his Christmas leave. We had talked about it, prayed about it and made up our minds. It was what was best. 3 weeks later, after a whirlwind and absent Marine...we said "I do," on a Tuesday night in our home church. We were surrounded by 275 of our closest friends and family. It was incredibly beautiful. And then, 2 days later, duty called.
He got on a plane and left. Again...
----------------------------------------------------------
Belly picture and regular update coming tomorrow!
Love you all.

How is it that I know the general gist and details of this story but I am still hanging on for dear life like I don't know what's going to happen next haha. Honestly, I'm finding out things I didn't even know.. love it!

Love reading your story... can't wait for your next post!!

Love it!! It brought back so many raw feelings that we, too, went through. Thanks for sharing your story! :)

I absolutely love reading your story. Everyone has a story to tell, everyone has the fingerprints of God written all over their story, and it is such an honor reading yours. I cannot wait to read what happens next!