My husband & I were very young when we got married and we were relatively young when we had our first child; my husband Michael was 23 and I was 21. Being a young parent is a challenge for anyone but we had the extra challenge of living far away from home without help from family. When our first child was born we were living in Germany where Michael was stationed with the military; there were no friends and family for literally thousands of miles. We were completely on our own, having a baby in a foreign hospital. Thankfully my pregnancy was pretty normal until the end of it. I had preeclampsia and had to be induced at 37 weeks due to high blood pressure. So on February 20, 2000, David Webb came into this world. He was born using the vacuum extraction method because he was in fetal distress, but when he arrived; his Apgar scores were all pretty much on par and he seemed to be doing well. Weighing in at 5 pounds 8 ounces and 18 inches long, we thought he was perfect. Little did we know that 10 fingers and 10 toes don’t make a perfect baby make.

David had feeding problems right out of the gate. We tried everything to get him to eat better. He was just NOT interested in eating more than an ounce or two at a time. Sleeping was another issue we battled A LOT. He had no desire to be asleep. Only to be awake and taking it all in. But he was happy. And loving. And beautiful. Our families visited us and could not get over how happy, alert and awake he was at just 2 months old. He was just loved tremendously.

At around 5 months old, David was still really little for his age and didn’t hit many of the traditional milestones that most children are hitting at that time. The pediatrician we were seeing chalked it up to him being so little for his age. Just before he turned 6 months old, David was hospitalized for 10 days for severe conjunctivitis. After he finished up his antibiotics, we had to follow up at the military clinic, but our pediatrician was out. So we visited another one who was available. She immediately had concerns about David’s trunk and head control. It just wasn’t there. She started us with the whole Early Intervention process. David was evaluated from top to bottom by many therapists and it was determined that he was roughly between a 1-2 month age level. I thought I was a terrible parent for not knowing these things. We started David in some pretty aggressive therapy. With the assistance of therapists, he was able to reach a couple of milestones, like reaching for a toy for the first time ( I still have that toy and will never part with it) and rolling over onto his tummy around 8 months old. He was still such a good baby. He didn’t mind being messed with all the time. We went to a couple of doctors in Germany but Michael’s unit was not the best at letting him take off to go to Landstuhl, the closest military hospital over there. We were able to visit twice and got absolutely no answers in regards to our baby. At that point, I made the decision to wait on anymore dr.'s visits until we got back to the states and more testing would be done then.

David and I came home from Germany in April of 2001. David was 14 months old and still not sitting up on his own, still in an infant carrier, and still only about 15-16 pounds. The minute I took him to the pediatrician, she obviously knew the severity of David’s problems. We started seeing specialists almost immediately. As soon as Michael got home that July, we started the testing processes. First the neurologist ran a generic chromosomal test followed by MRI’s and CAT scans. All of those tests were normal. Then we were passed on to the geneticist. Major wake up call. We found out that all the things that we thought made David who he is, were actually signs of some kind of syndrome. Test after test was run, and test after test came back as negative. We went through 3-4 years of aggressive blood work sent all over the country that always came back with the same results; our child was “normal” according to the blood work, but oh so globally delayed according to the “rule book”. At around age 5 we slowed down on the testing. It had been a long few years and we were ready to just enjoy David for who he was. During that time, little was discovered about David that we didn’t already know. We did find out he is profoundly deaf in both ears. Unfortunately, his fine motor skills are only at a 3-4 month level, so signing was out of the question. We fine tuned ourselves to respond to David based on his behavior instead, which is almost always happy or at least content. He has learned to scoot on his back backwards around the floor, and at when he is at home he roams the house looking for a good window to sit in front of. He is wheelchair bound the rest of the time. David started going to school full time at age 6 and LOVES the attention he receives there. He now attends a junior high school and has a one on one aide with him at all times. We still get calls occasionally from our geneticist to ask if we can put David in certain research studies. They have always come with the same answer though. “We still don’t know what your child has.” 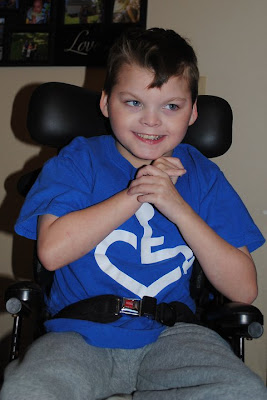 Michael and I decided to have another baby around the time David was 5 ½. I loved David, but I also wanted to have the experiences that my sister and other friends were experiencing. It was a decision based strictly on faith that we would have a “typical” child and thankfully we were lucky. On May 9, 2006, Kyle Matthew came into our lives. He was 7 pounds 3 ounces and 21 inches long. He too, had 10 fingers and 10 toes. But this time, while I was in recovery from my c-section, while other dads would have been taking pictures of their newborns faces, mine was taking pictures of Kyle’s toes and fingers so he could show me that his toes weren’t webbed like David’s and that his pinkie finger wasn’t severely curved inwards like David’s. That meant everything to me. We were blessed. I don’t like to say “normal” for my children. I think they are both normal for who they are. Is one more typical than the other? Yes. Does one get every virus under the sun, while the other one stays fairly healthy? Yup. Does one get to eat by mouth and one HAVE to eat via G-Tube? Yes. And am I lucky enough to be able to experience 2 different children who follow completely different rule books. I sure am, and I love my life because of it.

David is 11 now. He is still only at a 5-6 month age equivalency. He hits miniscule milestones. Raising one hand to be picked up is huge to us. He weighs about 50-55 pounds. He is still considered by our geneticist as undiagnosed. A few years ago, a different specialist gave David the diagnosis of Cerebral Palsy. Sometimes it’s easier to tell people that than to try to explain all the real medical stuff to people who have questions. The best advice I have gotten from a doctor regarding David is that I have to advocate for EVERYTHING that he deserves for him. We have to stick up for his rights. We are his parents. When people say, “I just don’t know how you do it.” to me, I just say right back “Wouldn’t you?” You know, there is no "how do you do it" because I just do it. He is my baby. He has my heart right along with his brother. Just like other parents take care of their children, my husband and I will always take care of mine. So you see, it's not that different after all. 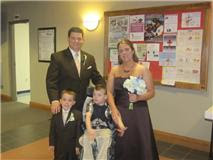 I LOVE LOVE LOVE that you were able to share your story!!! I, like most of Ramee's friends, are there for her for whatever she may need but it is wonderful for me to know that someone is out there for her to share in this journey with, that may help her understand her feelings. I can talk to her, or take her out to dinner, or go for a walk where she can vent but I don't understand what she is going through ONLY because I haven't been there. I try my best to put myself in her shoes and say how would I handle this if it were Liam, but the truth is all I can really do is LOVE Ramee and LOVE Mabel with all I have. So basically I am saying thank you for making her feel like she is not alone on this journey.

LOVE YOU RAMEE AND KISS MY WOO GIRL FOR ME.....

That was such an amazing story! Thank you very much for sharing! To put a face and names to some of Ramee's support system is really nice. Thank you so much for doing this blog for her, and all us readers....and thank you for being such an incredible mom. I LOOOVE your "wouldn't you?" answer, I always wonder why people see such silly things...but they just don't know. You have a beautiful family, and a truly beautiful soul in Ramee. A million thank you's :))

Natalie, thank you for sharing your story with all of us. It is a brave and courageous story, then again, you yourself are those very things! Your little guy is so handsome and I have loved getting to know him through this guest post. Thanks for sharing your heart-what a beautiful one it is!