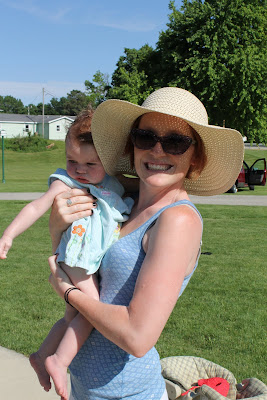 Sun hats, sunscreen, sunglasses, magazines, pink toes, ice cream cones, late night walks.
I adore these days of summer.
We took the kids to run through the water at the park. It was fun to watch the redheads run and run and run. It was fun to see Harper crab-crawl around the concrete as to not get her knees wet or dirty. It was hard seeing other new moms huddled together with their babies who were Mabel's age and perfectly aware that they were in the water. And then seeing Mabel and knowing that she isn't or doesn't show me that she's aware. But I left the park proud of myself because those moments are hard and sad but I still did it. And I'm going to continue to do it. And I know I'll be glad for it.
Today in the van, I told the redheads they were being annoying. It wasn't the best parenting etiquette according to some mom bloggers or moms in general, but you know what--it is what it is. They were being annoying. Rache laughed and said that she's so thankful that I say things like that. She said that most moms are thinking it or they say it but would never admit that they say it. Here's what I said in reply: I'm not going to fake it with my kids. Just like I don't want to fake in my marriage, my friendships or any other relationship.
Then I came back with the argument that I do believe it's important to 'fake it' in some situations in life. Sometimes it's necessary. Like yesterday at the water park. I was sad. But I faked it. Because it was necessary. And in that sense, I will fake it til I make it through those moments. But in my relationships--it's important to me to be real. Life is not so serious that I can't say to my kids that they're being annoying. Sometimes they are. Sometimes I am. Sometimes we are all annoying. Let's just face it, say it and move on.
Sometimes it's ok to cut loose and be free with yourself. Be open. Be honest. Two nights ago we drove by the high school while they were having Jr. High graduation. It was over and alot of people were outside. As we drove by with the windows down, I screamed. Loud. And it freed me like a teenage girl in high school with no worries and no cares. It took me back to the moments when life was just not so serious.
Blooming flowers, lemonade, picnics, sprinklers under the trampoline, laughing until it hurts. Welcome summer. Thanks for showing up for me.
Posted by rameelin at 8:07 PM

Of Pandas and Pirates said...

I too admit to telling Miranda she's being annoying. I try to never fake a relationship as well. Thank you for being so open and honest Ramee!

I tell all my children they are annoying haha. Last night I told Nathan he couldn't ask me any more questions while he was in the pool if he did he had to get out. He is a rapud fire questioner. Doesn't let you finish the first answer before the next question comes out.

And this - THIS is why I love you!! Keep doing this, Ramee.