God on a country road.

My leg is busted again.  So rather than push myself [like I normally would] I decided it would be best to bike for the next several days or weeks.  They say that you can bike when you have shin splints or stress fractures because you aren't putting direct pressure on the injury by making such sudden impact with the ground.
But I love poundin me some pavement.
So this will be hard. 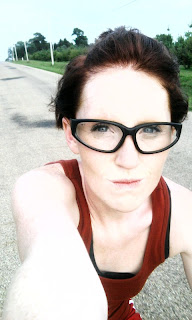 Anyway I wanted to write about something that happened to me yesterday, not so much to share it but so that I never forget how God met me on a country road and changed my heart.
I'm riding alone and I'm on mile 7.  It was hot and it was sticky.  The music is on random shuffle and worship is playing loudly as I pedal fast and hard.  I'm breathing heavily and sweating profusely.  It was about 98 degrees.
As the heat washed over me with each swivel of the pedal, I was amazed at how the humidity was sticking to itself.  That's literally how hot it was.
But suddenly, I pedaled through a 2 foot span of nothing but cold, crisp air.  This may sound like a joke but it is not.  It was incredible.
I knew that the Lord had met me on this road.  I felt His presence.  He was breathing on me and I knew it.  It was something you can't deny.
I got goosebumps immediately and started to cry.
Just before this I was praying.  I was thinking, "It's so easy to trust you, Lord, when there's nothing to really entrust to you...
I want to trust you now more than ever, but it is much harder than usual."
And then it happened.
The cold air of the Holy Spirit.
Bam.
But it gets better.  As I'm crying and my pedaling slows, I look ahead of me and all at once, in a huge group of about 7 or 8, these beautiful yellow butterflies took off flying in all different directions.
It was absolutely the most beautiful and stunning site I had ever seen.  I couldn't even breathe I was so hysterical.
On this dirt road.  In the middle of nowhere.  Alone.
And He met me there.  At that exact time.  And it's like I heard Him say,
"I'm in this too."
"I do not like it.  It saddens me.  But I have not forgotten you.  I am here with you.  I'm in this too and you are not alone."
And I knew in that moment that I was not alone.  He took time to meet me there.  He knew I needed to physically see Him in a time when I didn't feel much of Him at all.  And He loves me enough to give me that, although He never has to.  He chose to because He's my God and He loves me.
It was so overwhelming and beautiful.
Later in the night, Rachel and I took Harper upstairs to wake Mabel up.  When I picked her up, Harper leaned in to hug her as usual.
But then something happened that I will forever remember.
Harper looked up (at nothing), raised her hand to the sky and softly said,. "Hi."
We believe Jesus allowed Harper to see Mabel's angel last night and that is a gift that we will cherish forever.
Yesterday was a good day.
It's all going to be ok.  Because He is in this too and I am not alone.
[and neither are you...]
﻿
Posted by rameelin at 11:04 PM

Ok first, I love that picture of you! Check you out with your glasses pedaling along. haha. TYPICAL!

Second, I NEVER want to forget that day either. It was SO good. SUCH a good day. Everything about it felt new and real. God really loved on you that day, or wallered you around like Harper does Mabel...either one.

Isn't it funny how God shows himself to you when you least expect it? I'm happy for you! It's a feeling that will stay with you and sustain you for a long time to come.