She looks big, doesn't she?  Like she's growing.  But the funny thing is--she isn't.  Over the last two weeks we had her on a high calorie formula that had to be ordered from the pharmacy.  It's $300 for a case.  And Mabel lost weight.  She is still only at 13 pounds which is what she has weighed since she was 6 months old.  Medically speaking this is what you would explain as 'failure to thrive.' 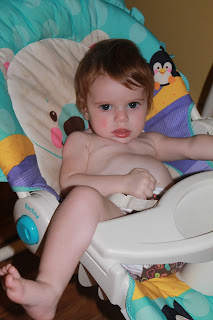 I thought that her weight was all I was going to be blogging about today and that was upsetting enough-but it turns out that yesterday had more in store for me than that.  I came home from meeting with her dietitian and speech therapist and decided I was going to call the geneticist just to check and see if they had her test results.  I spoke with our genetic counselor, a younger girl, and she had the results of the tests.
I never liked Science.  But now I find myself intrigued and educated in ways that I never thought I would be.  I am also rather confident in my knowledge, after all of the research that I have done and physicians I have spoken to.  That being said, I would usually explain my emotions in all of this but I haven't quite figured those out yet so it's best to stick with the Science for today.  It is confusing and may take alot of time explaining but I'll do my best.
Alot of the tests came back essentially normal.  Her genetic panel looks normal.  This is good news!
It also doesn't help us in the way of leading to an answer.
Mabel's symptoms are typical "Mitochondrial Disease" symptoms.  What this means is that she has the symptoms of many other syndromes or disorders with some key symptoms that are clearly mito related.
The genetic counselor explained that, in his notes, Dr. A wrote that based on symptoms and some findings, he believes we are dealing with a mitochondrial disease.  I asked her if it was something that could be diagnosed clinically (meaning based on symptoms alone) and she said that at this point he would not diagnose her in that way because there are so many additional tests that could be done.
I have researched alot about mitochondrial disorders because Mabel has almost every symptom.  It just fits and in my gut, I feel like I knew this is what we would be told.

Mito can be tricky...
Mitochondrial diseases are a diverse group of diseases caused by damage to small structures found in human cells that are essential in converting our food to energy. The result is decreased energy production and associated symptoms.  Some of the symptoms (but absolutely not all) include:
failure to thrive, poor growth, fatigue, short stature, swallowing difficulties, seizures, developmental delays, muscle weakness and cramping, loss of coordination, exercise intolerance, hearing loss, progressive loss of vision, and increased risk of infection.
There is so much science and research behind mitochondrial diseases but not enough [yet] to pinpoint every single one.  Each disease manifests different in every person.  2 children can have the exact same type of mitochondrial disease and it will present different in each.

Yesterday I was told by our counselor that we could continue with additional tests and even if they all come back normal, there is no way that they could ever tell us that Mabel does not have Mitochondrial disease.  Because based on her symptoms alone, this is what fits.  They can run all the tests that they have so far, in their research, and they may all look normal but that doesn't mean that she doesn't have some form of this disease that has not been researched or found yet.
Do you see why it's so important for us to fund research???

So, of course, we agreed to additional testing.  This requires us to make yet another trip to Chicago for a consult with a surgeon who will perform a quick muscle biopsy on Mabel (at a different time than our consult--thus requiring another trip...)  She will be under anesthesia and they will remove small parts of her thigh muscle to biopsy so they can get a closer look.  This is done because the mitochondria in our bodies changes from the blood to the muscle.  Just because the blood tests looked normal doesn't mean that something in her enzymes, buried deep in her muscle won't reveal the problem.

I know it's alot.  Stick with me here.

I asked if Dr. A believed that Mabel's symptoms could stand alone and could it just be by happenstance that she has seizures, developmental delays, fatigue, severe constipation, failure to grow and thrive, and a retinal dystrophy (among many other things)--all coupled together but not leading to a specific disorder?
She answered, quite frankly...no.
He believes that this is far too typical of a mitochondrial disease for her symptoms to just be a fluke.  In mitochondrial disease, often times Dr's lean towards this diagnosis and run these tests because one symptom makes the group different from another disease.  In our case, we believe Mabel's retinal dystrophy is the smoking gun.

Mitochondrial disease can be inherited and often times, it is.  However, it can also be sporadic and unrelated to genetics.  It's rare but it does happen.
Remember, though, that as far as Mabel's genes go--all looks normal and for that we are thankful.  It is always scary knowing that we have other children and that my siblings will have kids some day.  I am relieved to know that we are probably not dealing with a genetic syndrome.
How intricate did God make our girl?!

As much as I am relieved, I am also perplexed and troubled because Mabel is still so much a mystery.  We may not ever have the answers that we are looking for but I know that God perfected each detail of her body.  I just want to be able to care for the best we can.  That is our job, after all, as parents.  So in order to better care for Mabel I need to understand certain aspects of the disorder that we may be dealing with.
For instance, Mabel doesn't like to be held longer than a few minutes.  She gets overstimulated and irritable.  Is it causing her muscles to cramp?
She sleeps constantly.  It makes since if she isn't producing any energy, doesn't it?
She has trouble eating and fatigues easily.  Is she going to get stronger or is this what we will be dealing with long term?
We just want to do the best we can for our girl and we want others to know how to help us do that as well.  So as long as there are more tests that can be done, we will probably do them.

Although we don't have a definitive answer, I am at peace with what I learned yesterday.  I feel like we probably are dealing with some sort of mitochondrial disease, whether it's one that will have a name for Mabel or not.
But someday, I would love for it to have a name, and so we will fund research for Mito from this point on.  We may be the ones to find answers for our little girl...or for another little girl someday in the future. 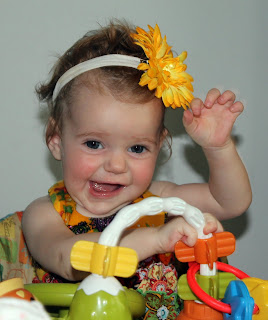 If you have questions, please feel free to email me.  rameelin at hotmail dot com.
If you would like to read or research more (please do!) visit here:
http://www.mitoaction.org/mito-faq
Please take time to look around this site and gather information.  It's not only interesting but important for each of us to understand!
To answer the question before it's asked:
Yes,  funds from the 5k race or any other fundraiser we do from this point on will go directly to Mitochondrial disease research.
Posted by rameelin at 12:49 PM

Prayers for you all Ramee!

As always prayers and much love to your sweet girl and family!

I have been following your blog for a few months now and I couldn't help but finally mention something that may be of use to you and your beautiful daughter.

When I first heard you talking about some of the issues with your daughter, such as poor vision, sensory problems, and gross motor problems, I couldn't help but think to refer you to looking into the book What to Do About Your Brain Injured Child by Glenn Doman.

They deal with all sorts of brain injuries (that aren't often even recognized as brain injuries), from mental retardation to cerebral palsy to epilepsy to autism to down syndrome.

The symptoms you describe reminded me of some of the exercises they developed to grow the brain pathways of children. They have sensory programs, visual stimulation, and an intensive physical and intellectual program, as well as dietary programs and a multitude of others. I am aware that there are those out there who say the program is based on outdated research or condemn it for whatever reason, but I have seen it work - blind children see, mute children talk, immobile children walk, retarded children read and write and do math better than normal children their own age. Even seeing one hurt child get well is enough - they have helped thousands in their 50+ years with literally miraculous results.

There are many children with a whole assortment of problems that have benefited from their programs, an interesting case I have followed is on this blog:

Anyhow, I thought I would at least mention it, it is worth giving them a call (they are a non-profit organization) and see what they have to say about whether or not their program (it is a home program they teach parents how to do) could benefit your daughter:

God bless and thank you for sharing your journey, best of wishes to your family and especially little Mabel.