Days like today are exhausting to me.  Physically, the drive is so draining but on top of that is the emotional build-up of what may take place at each appointment. 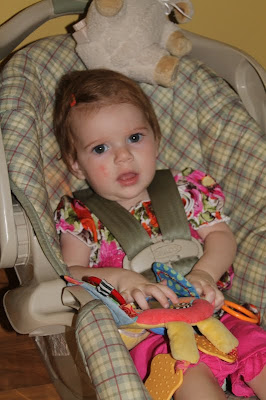 More than anything, though, is the sadness that follows.  I don't know how else to explain it except for that it is a heaviness that settles in my spirit.  I think going over Mabel's medical history with each new specialist is extremely consuming for me.  They ask questions like, "and is there a medical history you would like to make the dr. aware of...?"  And I usually laugh; not knowing where to begin.
Coming home from an appointment, I usually feel a great deal of irritability.  I don't want alot of noise or chaos because in my mind, there is enough of that already.  When I come home and walk into Wal-Mart, I want to stand on top of the bottled water display and just scream at everyone who passes, "Don't you know what I've just been through today..?!"
Because life is happening all around me and I feel like with each appointment, mine has taken two steps back.  It's out of body to watch everyone go on living when everything in me is at a stand still from 8 months ago.  It's surreal.
Today's appointment was good.  We just met and consulted with the physician who will potentially be doing Mabel's muscle biopsy.  We are going to wait until September because the geneticist realized that there were a couple more blood tests that could be ran on a sample of blood that Mabel had already given.  So we aren't proceeding with the biopsy until we have confirmation that those test show nothing definitive.  If they do (please pray that they will!) then we will not have to go through with the procedure.  It is very invasive and Mabel would have to be put to sleep, an incision would have to be made on her outer thigh and the muscle removed.  She would have stitches and would have the possible risks of infection or excessive bleeding.  It would be an answer to prayer if the blood tests would give us the answers we need in order to not move forward.
If we do, however, it will be early September before we have to have the biopsy.
I loved the surgeon.  She was kind and made it clear to us that the geneticist does not send her patients like Mabel unless they are fairly certain that they are dealing with a disease that warrants a biopsy (such as mitochondrial disease.)  She also said,
"I'm sure your geneticist explained that Mabel's symptoms are very likely to be caused by what we call a 'mitochondrial disease.'"
Just to hear her say that feels like a confirmation that we are on the right track.  I am thankful for the Lord's guidance and direction.  I am also thankful for validation from each Dr. that we see.
So after an exhausting day, I'm going to end with a few specific prayer requests on behalf of Mabel:
That she would begin to gain weight this week.
That her blood tests would give us an answer so that we wouldn't have to go through with this procedure.
That God would give us rest and peace.
That Mabel would have no seizures; that they would cease completely.
We love you and are thankful for you  Please also be praying about the race...We are so looking forward to what God has in store!
Posted by rameelin at 7:37 PM

A few years ago Steve had a bad reaction to his anesthesia and we had to go get a thigh muscle biopsy done on him as well to find out if he has malignant hyperthermia or not. Definitely not a fun process, but completely worth getting the finality of the results at the end. Hopefully you'll get the same clarity of results if you do end up needing the biopsy. :)

Praying the biopsy does NOT have to happen. Ug, Ramee. Trusting God.