In case you didn't notice:  the redheads are big. 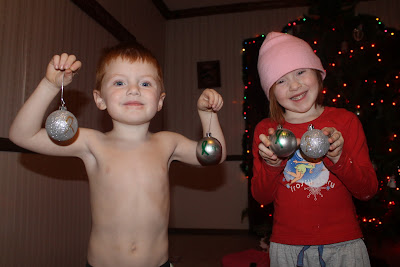 Like until yesterday  last year I was still calling them babies.  And they aren't babies.  They are big.  And not even toddler big.  But child big.  Small children.
Today marked Day 4 of sleeping with no pull ups {ok size 6 diapers but it's all the same)-- for either kid!  And they've both done so without one accident.  I'm amazed, impressed and thankful.  To be honest, until now I just had so much else going on that I didn't want to try to night train them yet.  It was just easier to throw a diaper on and head to bed.  I've been so sleep deprived this year anyway that it was the least of my worries.  And then 4 days ago, we ran out of big ol' diapers, it was cold and late and mama said no more.
It's been great.
---------------------
I went to the ER on Sunday for a weird breathing issue I have going on.  I'm not short of breath but I can't seem to get a satisfying breath.  The best way to describe it is like when you're trying to yawn and yet you can't.  Do you know what I mean?  It's so frustrating!  Anyway, all the tests looked fine and I walked out with a couple of papers in hand that read, "How to cope with anxiety"  and "What you should know about grief."
I wasn't denying that some of it could be anxiety but I also didn't realize that it could cause my breathing to do this for days and days.  I suppose it can.  However, none of the medicines that they suggested have worked either.  Although I do feel better today, mostly because I refuse to let it rule my every thought (although it's tough.)
What I was thankful for out of the entire experience, however, was that the Dr's and nurses actually acknowledged anxiety and grief AND the very real symptoms that can be part of those things.  Many years ago, mental illness or emotional disorders were not looked at in the way they are now and people are very fortunate.  I don't often deal with anxiety and nothing triggered it so I'm just praying that nothing more is going on that they may have missed.  Praying also that it subsides sooner rather than later!
-------------------
The kids' Christmas shopping is done.  I even ordered them these little 'button bunnies' that have a g-tube button in their tummy!  I'm thankful to at least be finished with their shopping.
*********
Can you say duh?  Because that's all we say when we see how pretty she is.. 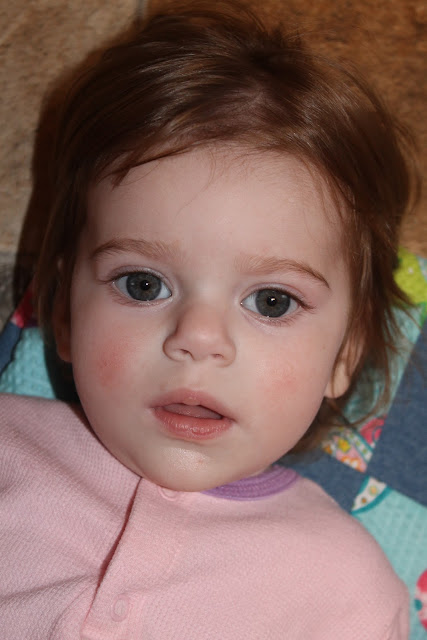 Aw, Ramee I hope your anxiety subsides quickly! I had that problem when Doc was in Afghanistan....I didn't think I was anxious at all, but every night when the house got quiet all of a sudden my throat starting feeling like it was closing. Not ACTUALLY closing, but exactly what you described, never a satisfying breath. The breathing exercises didn't help me, because all I could ever think about during the exercise was all the stuff I needed to do as soon as I was done with it. Talking with a therapist really helped me, though! I was completely skeptical, because I thought to myself "It's not like I never talk about the stressful stuff going on! I mean, at times I feel like all I ever do is talk about it!" But alas, it helped a little! Praying for you, peep!