The day before yesterday was a kitchen floor kinda day.
I found myself there--sobbing and shaking--after looking at Mabel and realizing, once again, that I have a child who is not 'typical,' who does have major medical issues and who the Dr's just can't seem to figure out.
She was having a very 'mito' day as we like to call it around here...because once again-even if they can't confirm mito in Mabel, we feel like we can.
She was so tired she didn't crack a smile.  She only ate by mouth 3 times and that's because that is all she was awake.
Her cheeks flushed for no reason and she couldn't hold her head up.
...and so neither could I... 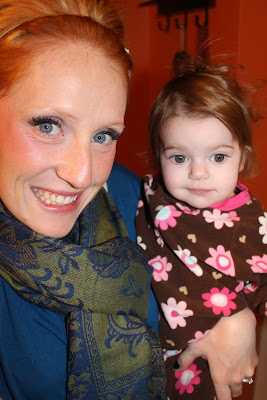 Sad.  So very sad.
Do you know what's hard?
*When I put Mabel in her swing or bouncy seat and I have to adjust her arms because otherwise she sits like a scarecrow with them straight out.
*When Mabel falls straight to the floor while trying to sit up and laughs about it because she doesn't feel pain.
*When a perfectly put together mom at McDonalds makes the comment under her breath that "That baby is too big to be in that kind of carseat..."
*When Mabel throws up so often and so much that I just sit and watch her until she finishes without moving at all or being alarmed.
*When I read a story to Nora about a bear who cannot hear well and she always chimes in that 'neither can Mabel...' even though I've never told her that.
*When Mabel searches so hard for me, but her little eyes just can't get it together to find me [but she smiles anyway.]
*Knowing that Mabel can't run down the stairs on Christmas morning like any other 18 month old might do.  She won't even know it's Christmas.  She doesn't even realize what toys are or that she's getting any.

Those moments are hard.  And they don't go away even though time passes and the rest of the world resumes.  Those things that would sadden any mom's heart, weigh heavily on mine.  Some days they hit me harder than others.  Some days I can't explain my sadness or my inner grief.  I can't and shouldn't have to.

[Special thanks to Rache for just hugging me as you walked through the door and saw me sitting there, expecting nothing from me.  You always just let me be.  And I appreciate that.  You never say "things will be ok."  "She's getting better!"  "God's handling it..."
Because you know that in the moment I just need you, your hug and the quiet.  I love you for it.
You're the greatest friend.] 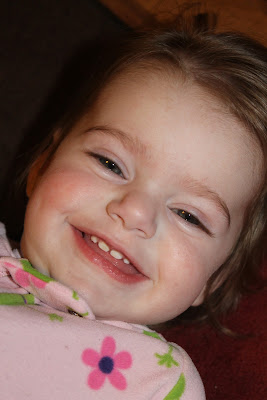 She's teething so we were up last night at 2:30 am with the first seizures I have seen in almost 2 months.  It was pretty devastating but I'm hoping we have seen the last of them for awhile, or at least after her teeth come in.  Poor girl.
-----
In other news, Mabel's Able is officially a not for profit organization!  We have our own bank account and paypal and it seems very official.  It's been a long time getting everything the way we wanted it and needed to have it set up appropriately.  It feels amazing!  There are already some things brewing for fundraisers to kick off 2012--one of which being a scentsy sale!
Who doesn't love Scentsy?

If you have any other ideas or would like to head up a fundraiser, please let me know.  You can email me directly at rameelin @ hotmail dot com
or email us at our official email:  mabelsable @ hotmail dot com

Exciting stuff!  And I'm so incredibly grateful to all of you who have helped us this year by donating, fundraising and stepping up for us.  We love you all for it!
---------
Christmas shopping today with all 3 kids for their dad, Krystal's baby shower and wrapping tomorrow evening, visiting with friends on Friday and then Christmasing all weekend.
Excited it's finally here.  Hoping to make the best of it!

"Mother love is the fuel that enables a normal human being to do the impossible.”
Marion C. Garretty

You should look into this fundraiser: http://www.square1art.com/
Great company (our local Montessori school works with them)

((hugs))
I don't comment often, but please know that I am praying for all of you.

Oh Ramee..i don't know what to say...i am working with a lot of kids with special needs and their parents. I know that words won't heal your pain and that i can't help you chnage your situation. But i can tell you that i have a looooot of respect bc you're doing such a great job as a mommy of three. Mable is a special child and she has a special mom...you...bc you're strong enough to handle it.
Ramee, i am always keeping you in my thoughts and prayers.....sending you tons of hugs!!!

I would love to have like a Pampered Chef or Party Light part up here in Chicago area & give to proceeds to Mable's Able in 2012! Great idea Reamee. Please know that you & your beautiful girl are always in my heart & prayers.