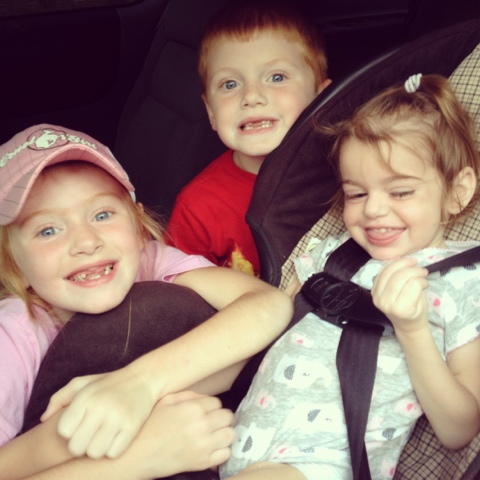 We ushered in fall yesterday.  After several days of temperatures that were no lower than 98 degrees, yesterday was a welcomed change.  The wind blew briskly through the windows, the house is decorated with lovely oranges and yellows and the quilt was spread perfectly in the front yard, surrounded by friends.  It was as if this autumnal season never truly left us.

I'm so excited to be here, at this place of crisp, fresh, new beginnings.  For the last several years and especially the year leading up to the present, every season has been tainted by something from the start.  But not fall.  Not this year.  Not now.

Now, life is simple and relaxed.
Despite the hard and the muck (the crying, seizing, jerking of Mabel), these days are typical and adjustable.  There is a sense of relaxing, a sense of calm.  Inside of myself, especially, I am liberated and the burdens that I once carried without even knowing I was doing so, have been lifted.  Right now, in this beginning of fall, I feel a portion of myself coming forth that I have never quite felt before.  ﻿

This week Mabel had two appointments.  She hasn't seen Dr. S since before he diagnosed her last July.  When he saw her just a few days ago he couldn't get over how long and thin she was but also how much more she is jerking, which is obviously the cause.  Mabel cried the entire hour and a half that we were with him, which in a way was good.  He acted like he would help be persistent in getting the cry stopped.  He looked her over very well and all in all still acts completely perplexed by her.  He still believes that she has an unspecified form of NCL/batten disease but he isn't convinced that there isn't a secondary syndrome or disease lurking or that we still haven't quite gotten to the bottom of this one.  This gets tricky because:
-there are only so many known genes that we can test for to confirm batten disease.
-most of the known genes are for the types that affect older children.
-even the gene sequencing doesn't pick up every mutation or change in a specific gene.
-we may still never know where this all stems from in Mabel's body.

So, while we were there I allowed Dr. S to do a skin biopsy, not only to confirm NCL in Mabel but also because it could help us put aside any other possibilities of anything else going on.  Needless to say, even if she had another disease it would be so incredibly similar to NCL that the end result would be the same.
Mabel is very sick.  She isn't getting better.  Her brain is deteriorating.  And she will die.
But while she is here and her cells are alive, they are full of information.  Valuable information that will be crucial for Nora and Braden someday and it has always been my goal to equip them with as much information as I can possibly give them from this point forward.

So that appointment was overwhelming and not encouraging, though none of them are at this point.  In the same day we saw Dr. K, who is Mabel's neurologist and her longest specialist.  Short and sweet, we left with a couple of medication change ideas to help with the cry but I'm not sure that they will work.  If they don't, we heard some different options and will have to deeply consider them from this point on.  Mabel cannot live in pain or even with this type of irritability any more.  It isn't right.  It isn't fair.
And we're both exhausted.

So our week started hot, was overwhelming halfway through and ended cool and refreshing.
To be honest, that about sums up the entirety of my life up until this exact point, and that is all ok.  There is something so beautiful in the heat, in the discomfort and in the glory of the new.  I am so thankful for every single bit of it.

Welcome, Fall.
So So glad to see you're face.
Posted by rameelin at 3:16 PM