It was the second day of the long sleep when I found myself curled up in my large bed, covered and weeping.  The first day of her sleeping caught me off guard; worried, anxious and sudden, my mind ran wild.  People came and went and all the while I said nothing.  I pretended, to them, as if she were taking a nap or I had already put her to bed for the night.  The reality, however, was that she had fallen asleep after a day of crying and she woke very little after that.
For 56 hours in fact.  ﻿ 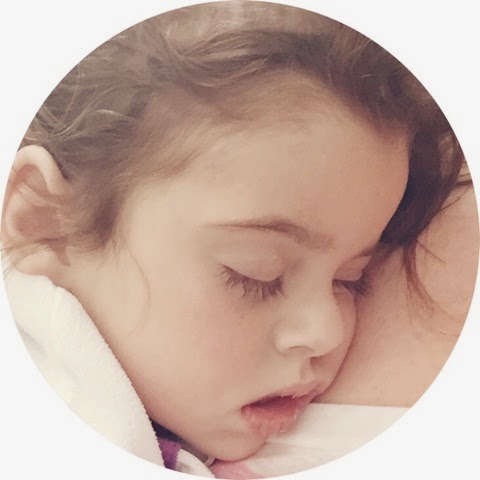 On day two of the sleep, the worry and anxiety turned to simple sadness.
That this is our reality.  That she could in fact go to sleep and maybe never wake.  That I am going to have to bury my daughter.  That this disease is changing her and will take her from me.
I repeated over and over that her actual death is not what worries or even saddens me.  It is everything leading up to that point that is heartbreaking and terrifying because it is so very unknown.  Not only to me, but for everyone.
---
I called my sister on the first day of the sleep.
I explained my frustrations, not being able to articulate what I think the slumber meant and yet knowing somewhere inside of myself what it must.  What it probably does.
What it must mean?  What it probably does mean?
Well all of the symptoms and the signs point to chemical, and physical shut down of her body.  "If I were on the outside looking in at someone else's life while this was happening to their child with batten disease, I would form an opinion about it based on the symptoms," I told her.
She stopped eating by mouth 5 weeks ago, she has stopped giving me hunger cues altogether, and now she has fallen into a long sleep.  Her body is entirely still, something out of the ordinary.  And yet, I have no conclusive proof that her brain is, in fact, shutting her body down.
The only proof I have is in my gut.
The wrenching and non-digestive type of feeling.
But as a mother, the ONLY mother and caregiver to this child, it is infuriating to me that I cannot and maybe will not be able to know when death is near.
Jeni expressed that she didn't want to go to work if we thought it was more serious than just sleeping.  I explained that we had to be able to live. We have lived so fully with her and I want  us all to carry that through.  I want us to live, breathe, and wholly feel it all.  I don't want us to sit for weeks at a time and hold vigil for her.  We have lived and allowed her to live and I want us all to continue to do just that. 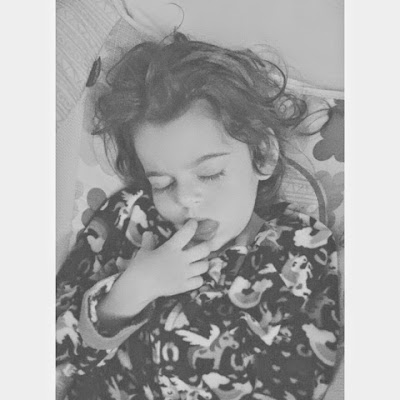 So what does it mean that she came out of 12 hours of screaming only to go straight into a 56 hour period of sleep?
I do not know.
For some children, this is part of a very noteworthy decline, one that leads to a somewhat peaceful death.  Not shocking, but just shocking enough because it is 'gradual and yet sudden,' as a good friend quoted to me this week.
For other children, this is just another phase in this disease.  I remember at the conference last summer being amazed at the number of children who were sleeping and were so still, with little to no movements like Mabel has, and I was in shock to learn that many of the were, in fact, not sedated.  That was just a phase that they had moved into.
And I'm not sure if we are there, or if Mabel's disease is moving in that direction.  All I know is that for 2 1/2 days straight I could barely get her to open her eyes.  She was not medicated.  She was simply sleeping.  She was peaceful.  She was calm.  I was able to feed her through her tube, keep chapstick on her lips, change her diaper and even put her on my chest, all without her waking.
All of this for a child whose brain has never prompted her to sleep on her own.
So while the rest was welcome, and while seeing her peaceful was an amazing sight, indeed, it was incredibly worrisome and all new territory for all of us.  The entire house felt different; heavy.
﻿ 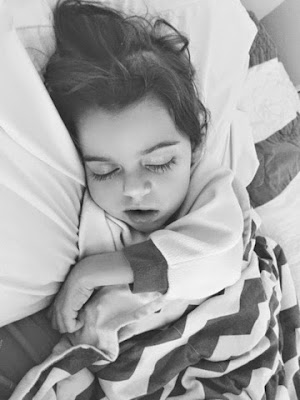 So on day two, deep beneath my covers in the safety of my room, I let loose.
I prayed and cried and prayed and cried.  Somewhere in the day I found strength between tears and I managed to follow my own mantra about continuing to live, and I was able to go for a run.  It was a 'grief run' for sure; the wind blowing and me knowing that it was, but not fully feeling it.  It was one of those days where the rest of the world looks so happy, without a care, free and light, and in my heart I wish I could have screamed to the mountains everything that was  happening in my beautiful, cozy little home with my beautiful, dying little girl.
It's horrific really.
The whole thing is horrific.
But on Easter Sunday, I was determined to at least get her out of the house, sleeping or not sleeping, to be with our family and to break up the heaviness of the situation.  She did wake up, though, not like her usual self.
And even today, she's just not.  She's awake, eyes open, but she is still.
Calm.  Quiet.  Peaceful.
All beautiful things that I have long prayed for.  And yet my heart turns and aches at what it all may mean.  Each change is so difficult to manage, so frustrating to try and understand.  All I can do is lean on the ones who love me so greatly and the One who controls it all and trust that it will all be exactly the way that it is meant to be.
Instead of trying so hard to figure it out, I'm trying so hard to not take her big, beautiful eyes for granted.  I'm trying to smell her a little deeper.  I'm trying to focus on being present with her while still living 'normally.'  I'm trying to accept it all and worship a God who is bigger than any and all of my feelings because He placed them in me and He created me for this purpose.
To be her mom.
Life or death.  Here, now, then and always.
And it is the greatest gift I will ever receive.
Today she is awake.
So much is different and new, but she is awake and here with me.
And for that very reason, I am thankful.
﻿ 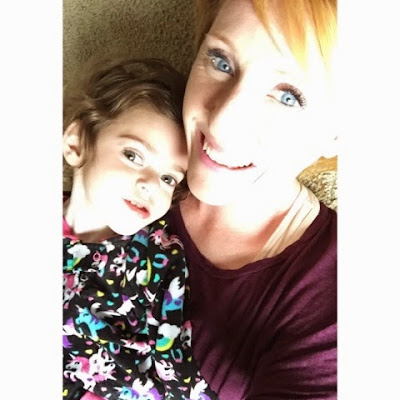 This broke my heart. I think of your family often.

Dearest Ramee, I am just catching up on all the posts. I am so happy for the new love& move into a new home, & that the Redheads are thriving! I hope it will be all that you all have been looking for & praying for. For Mabel's changes, I am praying for you & the family. My heart is aching for you more than I can ever say. I know it is "expected " changes, but it doesn't make it any less painful to endure. As always, I am sending you all my love, hugs, and prayers. ♡♡

Dearest Ramee, I am just catching up on all the posts. I am so happy for the new love& move into a new home, & that the Redheads are thriving! I hope it will be all that you all have been looking for & praying for. For Mabel's changes, I am praying for you & the family. My heart is aching for you more than I can ever say. I know it is "expected " changes, but it doesn't make it any less painful to endure. As always, I am sending you all my love, hugs, and prayers. ♡♡

Hello Ramee, I just wanted to leave a note. I have been following your posts since Lent a few years ago. I feel like I know you and the kids. My heart ached to read your last post. You are so awesome and in touch with what you should be. Your amazing, do not doubt or forget.

Sending my love and prayers for strength and peace for Mabel and all of you.

Ramee, I stumbled upon your blog 2 years ago and have been reading about you and your redheads and lovely Mabel ever since. I often include you and your family in my prayers. I hope it's not too weird a thing to hear from a stranger on the Internet. Love and peace to you and yours.
Laura