This weekend was not only our first 4th of July without Mabel but it was also Nora's very first 4H horse show.  She has been practicing for weeks with Pawpy, Uncle Jake, and Heather and was very prepared.
Though, one thing I have learned for certain is that no amount of mental preparing can actually prepare you for what lies ahead.  And when it was time for our girl's first class of the day so many tears and so much anxiety followed.  ﻿ 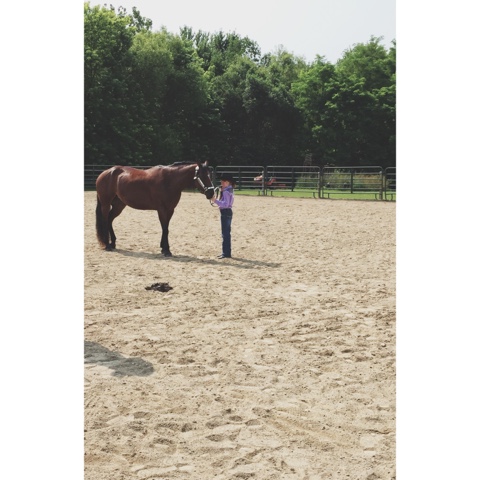 Uncle Jake walked with her into the arena and she did fantastic.  It seemed that her nerves quickly subsided and the rest of the day she truly enjoyed herself.  ﻿ 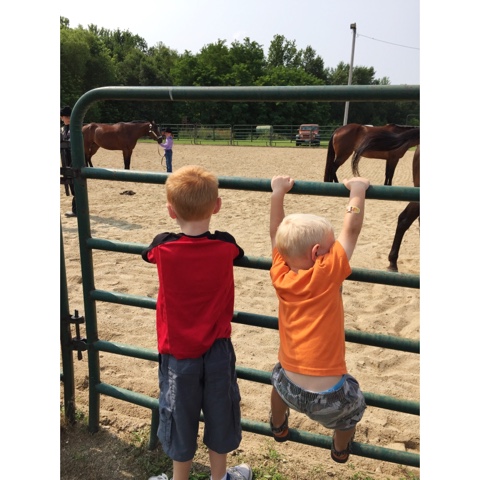 Nora's spirit is much like Aunt Jeni's.
She is calm, peaceful, introverted, nervous, dedicated, articulate, and beautiful.
She is a rule follower and wants to be very good at whatever it is she's doing.  She's determined and focused.  She has so many qualities that I admire.  ﻿ 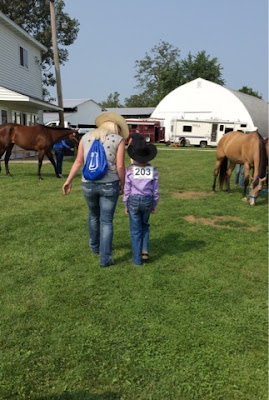 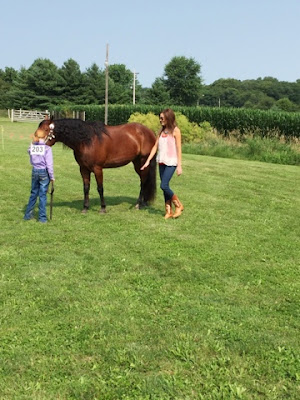 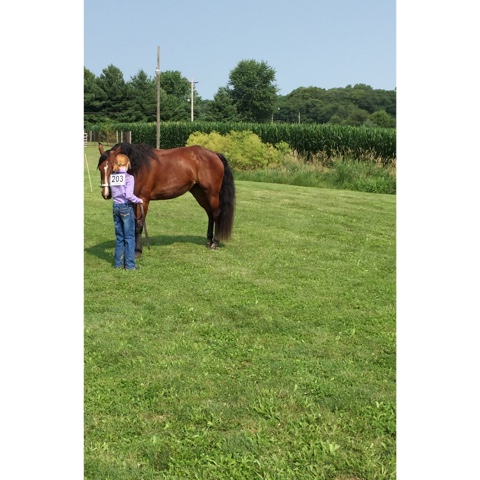 When it was time to ride in the afternoon classes, she placed in every class she rode in.
For sure a confidence booster!﻿ 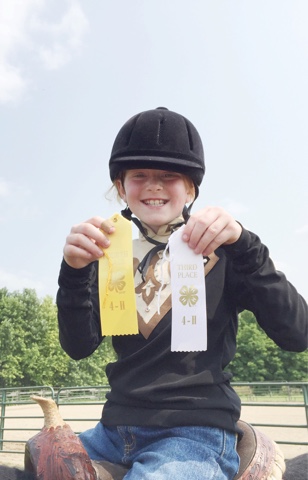 I watched Saturday as my sister and brother rose up for me and for this little girl and I was, as usual, in awe of the siblings I have.  How lucky I am that we all love each other in the ways that we do?  That we are devoted to one another, stand by each other, never leave.  We just stick it out together and know what it means to really be there when it's important.  This is a gift, one that many people don't ever experience.  Not only do I know it but I don't take it for granted, not for a second.  They are remarkable humans and I adore them. Their hearts are not meant for a world like this one, but I am so thankful they are here.  They are so good.
And the pride they have for their girl, it's just incredible.  ﻿ 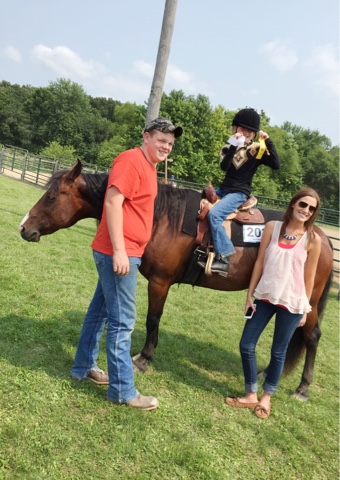 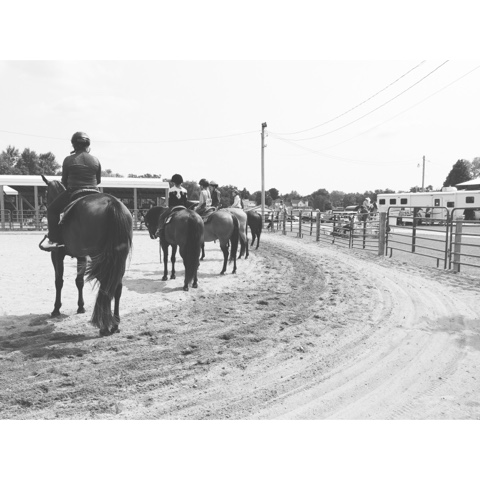 And I can't ever explain how proud I am of her.
Truly.
I started out this summer saying that, sure, she could do 4H but I wasn't taking her!  But seeing her this weekend may have changed my mind.  I spent many summers at these 4H grounds watching my sister and brother do what they loved and now, to see her do it-it's something very special.  She was truly made for this.  ﻿ 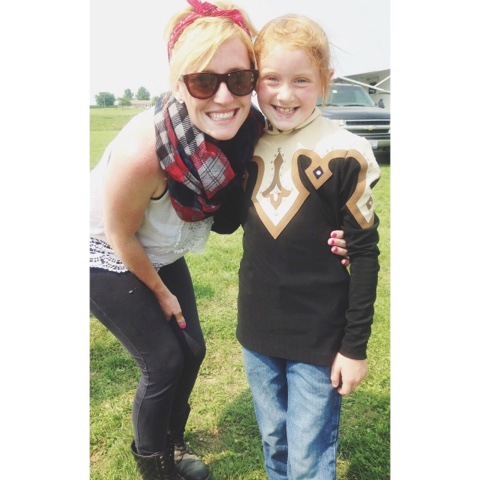 So day one was a full success and by the end of it all she was confident and energetic.
To see her this way means more than I could ever explain because this little girl has been through so much.  Things I don't write about for her sake; so that one day she can tell of her own emotional journey and I will not have tried writing it for her.
All I can say is that she has courage beyond comparison.  Just 5 weeks after her sister went to be with Jesus she showed the world that she is brave in a way that most adults can never do.  ﻿ 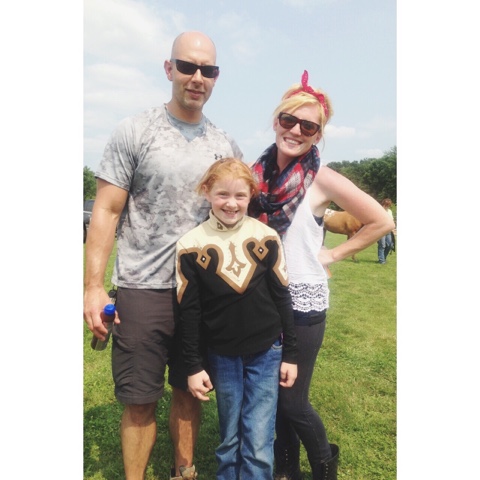 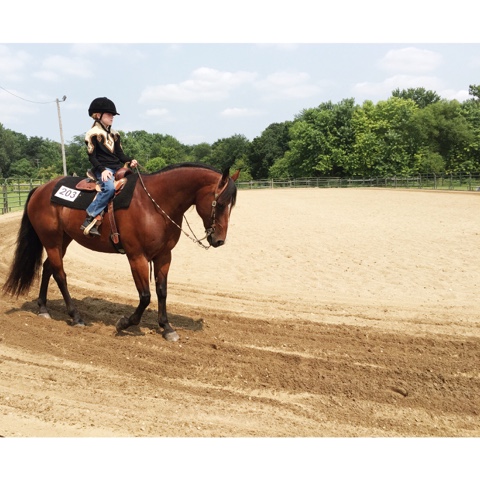 Day one ended with the costume class after 9 hours in the heat.
Nora placed in this class as well, celebrating our Independence as "Miss America" on our best horse, Half Pint.  It was pretty special indeed.  ﻿ 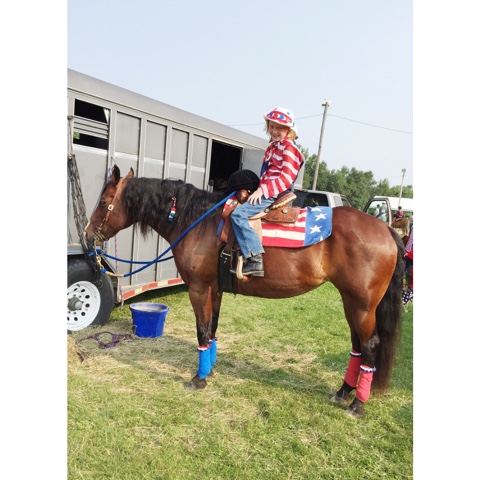 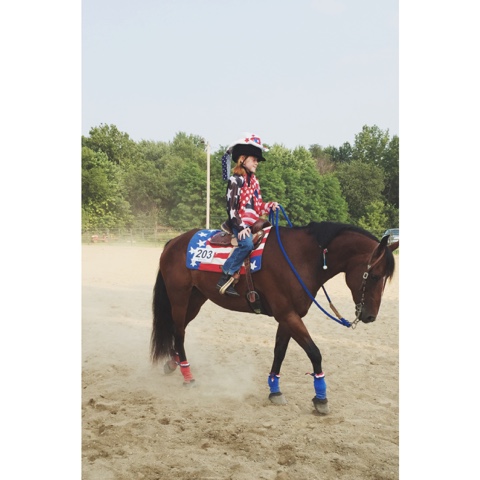 After such a big day we were all exhausted and truly I should have just known to call it a night. But it was the 4th of July and parents typically take their kids to celebrate that sort of thing.
Only I had no idea that going to see fireworks would trigger so many hard emotions for the kids or myself.
But it did.
I suppose that it's so hard for me to write about it all because I just assume the world can see the gaping hole where my heart sits, and theirs.  But the world doesn't see that.
The world sees a mom who truly is joyful but they don't see the one who is utterly exhausted, devastated and heartbroken; longing for a baby whose life was too short, whose suffering was far too big and whose legacy is just beyond explanation.  A mom who fears that the 4 years her baby lived will go forgotten by the world.  That it will all return to 'normal' for everyone else and there will be nothing normal at all left for us.
What the world doesn't see are the bright eyed children who seem happy and adjusted break down for no apparent reason, refuse to eat, struggle with belly aches, not wanting to leave the house or sudden moments of total hysteria over a sister who is suddenly just not here.
There may be triggers and some days there are none.
Either way the sadness and panic come and all we can do is wallow our way through it together.  The rest of the world wants it to just be another year of fireworks but it sure wasn't.
Not for us. 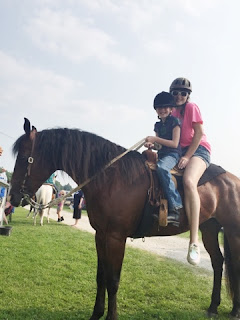 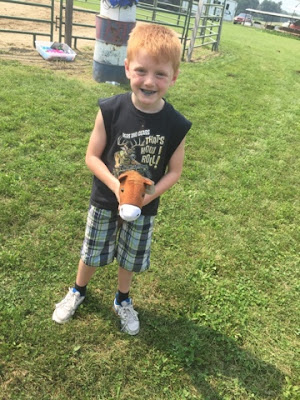 But we ended up getting some good sleep after several meltdowns and we woke up ready for another day in the sun and mud.  This time, a fun day.
Games on horses.  A country kid's dream.  ﻿ 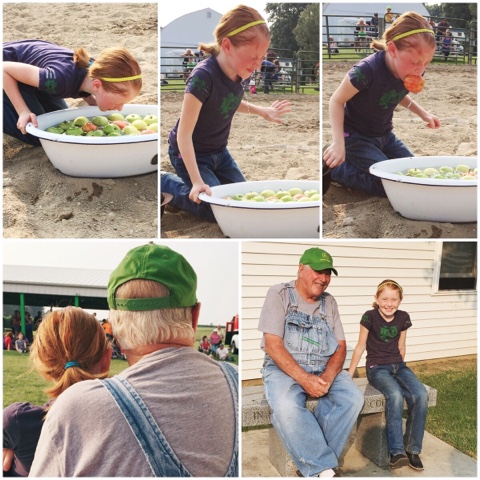 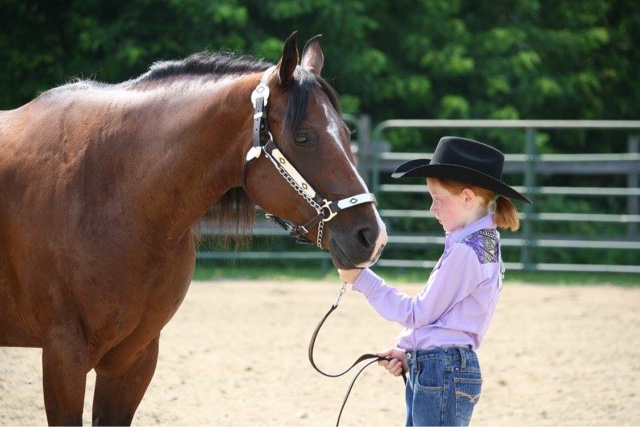 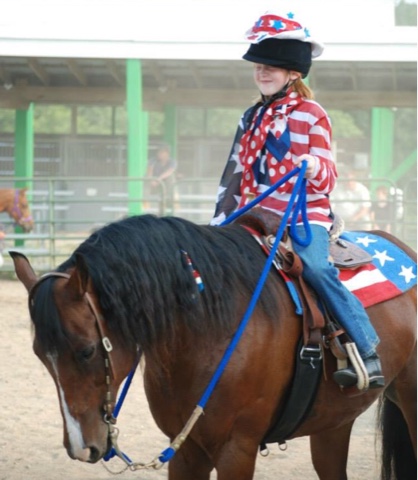 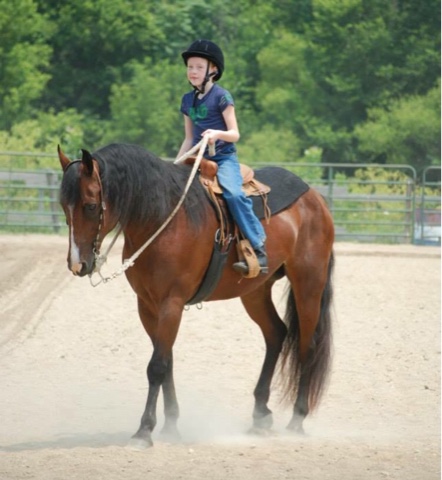 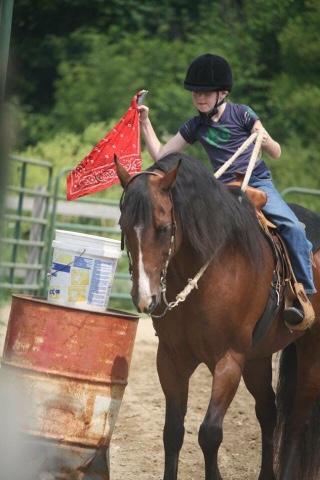 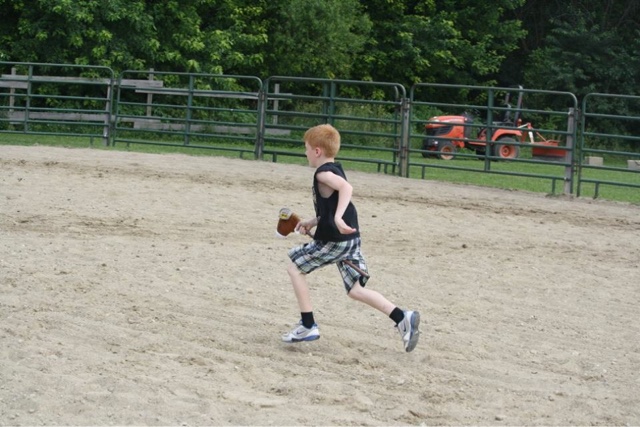 A six hour day, with a lot of laughs and a lot of sun made for a really exhausted mommy.
After the kids and I were bathed and I thought they were tucked in bed for the night, I tucked myself into the corner of the couch to finally let loose and literally weep in a way that I've done probably once a week since Mabel died.
Only this time, my biggest, sweetest girl walked around the corner and joined me.
People don't see the ins and outs.  The really gritty hard stuff that follows a beautiful, exciting day in the sun that leaves you so lonely inside you feel like you may die.  They don't see it from me or from them but I suppose that's because it's not for them to see.
Her head rested on my chest and her little hand rubbed my arm and as I cried, she simply said,
"I know mommy.  I know."
She cried and talked about how she misses grandma and how it hasn't even been a year since she died but she already forgets what it's like to have her here.  How she's scared that she'll do the same with Mabel.  How she feels guilty for wanting to be so busy and she's just so afraid.  I hugged her tightly and just reassured her as she did to me,
"I know baby.  I know."
We cried together, holding each other for a long time.  And then we went to bed together and slept soundly, her breathing in time to mine.
I'm still not sure how we will survive it some days, when the air feels so empty without her here.
But I know that we will.
I see the love of my own sister & brother, my parents, my grandpas, my wonderful friends and I know with their support we will survive it.
One hard moment, one day, one really touching, tough, amazing weekend at a time.
Together.
﻿ 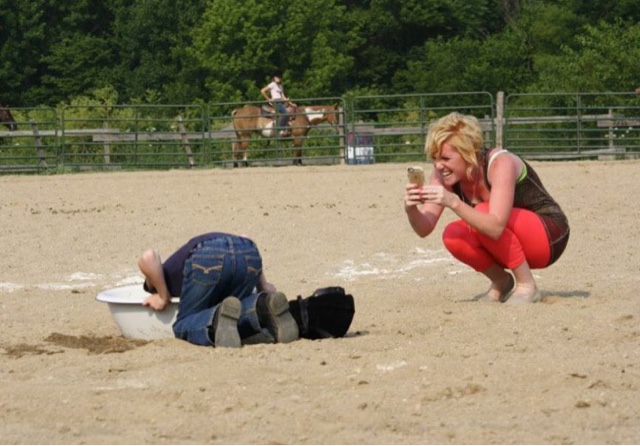 This year, on the fourth of July, I thought about what it means to be free.
I'm grateful for our country but most of all for a God who ensures that with the hope of Heaven, we are truly free from this wicked world and all it carries.

This year I silently thanked Him for taking Mabel home, to be with Himself and freeing her from her pain, suffering and batten disease.  This year I am grateful that she didn't have to suffer from the 'fireworks in her brain' as we always described her seizures to the kids.
This independence day I was grateful for His goodness, as I am every day.
He is faithful in never leaving us.
Our victory in surviving the pain without her is rooted in Him, together.

“These things I have spoken to you, that in Me you may have peace. In the world you will have tribulation; but be of good cheer, I have overcome the world.” --John 16:33