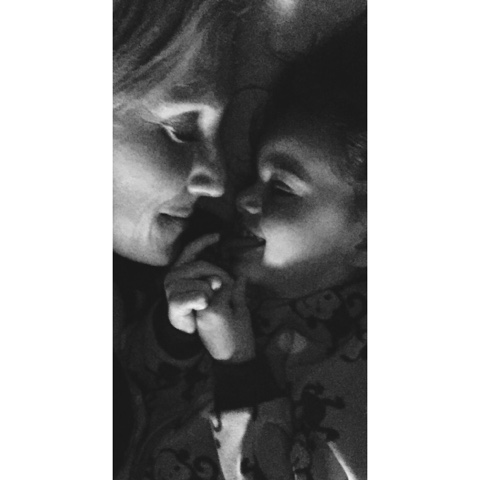 Last year on this day I posted the above photo on instagram and typed it for the first time:
her belly was no longer working correctly.
Putting it out there for the world to see and understand made the fear and horror that we had been facing inside of our home for weeks more real.  It made it true.  All of the details in her body were relentless in making it known to us.
Our girl was going to die and it was just a matter of time.
It was so hard because there was no way to know for sure.  You think there would be but there was no particular defining moment that made me see it more clearly or understand better what would take place or when.  I was in a bad way; a worried and fearful mama, mostly scared of what dying looked like for this tiny child in all her frailty.  I just couldn't watch her wither.  I just couldn't watch the end steal from her, her smile.  I was terrified.  I spent the days crying as I walked her and screamed loud for mercy on country roads.  I cussed God and He comforted my soul.  I cursed the world and all of it's heartbreaking beauty, knowing that I would never, ever see it the same, not ever again.  I didn't know then what I know now-which is that I could.  And even, that I would.
I wasn't sleeping and eating wasn't a necessity anymore either.  I cried for hours every day for weeks.  I only remember moments, bits and pieces in time and conversations.  I remember knowing how close she was to dying and feeling like no one else around me knew for certain.  Until they did.  And then the hard things followed.  The phone call to the funeral director while I sat in the morning sun on my front porch alone.  It just happened in a moment of total bravery and even caught me by surprise.  The call that I had dreaded for so long had been made and suddenly it was all so surreal.  Hard but really easy decisions followed.  They were the kind of choices that revolved around tiny children's hearts and what was best for only them.  They were all that mattered in those moments when nothing else made sense.  What would ease the hearts of a broken-hearted sister and brother?
None of those things happened before today, last year.  They were all to follow this day.  I first had to endure Mother's Day, knowing in my spirit that it was the last Mother's Day that I would hold all three of my children on earth.  And then a couple of weeks followed before the tough stuff really took over our daily life.  At this point, one year ago, I was still feeding my baby with batten disease and then draining her belly 4 hours later of the food that she never absorbed... in order to feed her again.  I sought advice from all the amazing medical professionals that I had surrounded myself with and only got fairly clear answers from one, a dear friend who loved Mabel like her own and had helped me with the nurturing of my babe since she was just 6 months old.
She reassured me that what I was feeling was true and right.
That the intake of food was making her miserable, that her body couldn't absorb the food, that feeding her and then draining her belly hours later-all day, ever single day-was keeping her alive but at what cost?  She would scream so harshly when formula hit her belly.  She had stopped sucking and drinking by mouth weeks ago.  This was the time when God would have to show me, and I as Mabel's mom would have to really listen to Him in order to know what was right.
So for the next couple of weeks, before the vomiting began and while she was still smiling a little through our days; before the screaming became indescribable and the very life being poured into her made her body reject itself-I continued to feed her.  And then, hours later, drain her belly.
I remember like it was yesterday, watching in total horror as every single ounce of undigested food would come up through the syringe the second I hooked it into her g-tube button.  I didn't have to "vent" it.  I didn't have to "plunge" it.  I simply hooked it up and I watched.
Four, five, sometimes six hours had passed and yet food came up from her belly and back into the place where I poured it to begin with.  I sat beside her and sobbed, knowing.
Oh the knowing.
I documented all of it.  I frantically sent photos and got no good responses.  No one knew the answers and that was no one's fault.
It was just me, the Lord, and my girl.  The way He had intended all along, I'm sure.
On this day last year, I got a few minutes of really good smiles.  I pulled out a dress that I loved and I put her in it.  I took her outside on my favorite quilt to take photos with my camera that I really felt would be the last.  I'm glad I took them.
...But I hate them now. 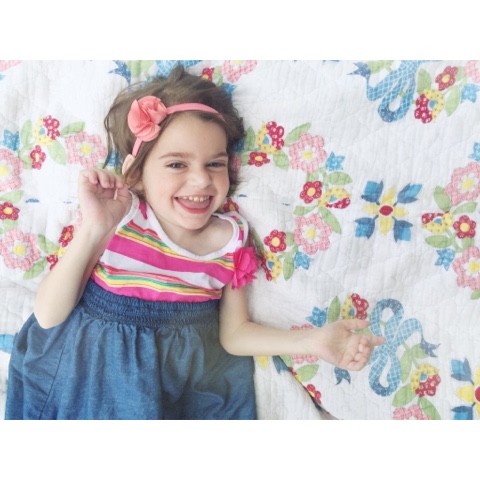 Don't get me wrong, she's beautiful and perfect, of course.  And we had a really funny time for five minutes trying to capture these little grins.  But her body was really little and even if no one else could tell the difference, I had already felt the changes beneath the clothes and I was sick about it.  It was hot on this day last year and the tiny bugs had already started flying around us.  They were landing on her face, next to her slobber.  I had to pull her hands away from her mouth in between pictures because she was biting and chewing them so bad.  She grunted and I talked, like always.  Just Mabel and I.
Chris was inside and my mom pulled up for just a few minutes.  I don't remember what happened next.  I took her inside, put her back into her jammies and the rest is completely gone from my memory.  Like most things from this time, one year ago.
I printed one of these photos for my mom for Mother's Day last year.  She has it framed in her kitchen.  Mabel's eyes tell a story of Heaven and I think I'm heartbroken knowing it, looking back.
I miss her so much.  I miss her body and her smell and holding her close.  I miss caring for her in the ways that only I could.  I miss her matted hair and her sweet fingers.
I've gone through the motions so well.  Some days are awful and some days are full of total peace and joy.  In fact, a lot of them are.
Reliving the days from last year are agonizing.  In fact, the memories of the days leading to Mabel's death are harder to think about and tap into than the actual day itself.  That day was remarkable and beautiful.  These days were excruciating, indescribable, lonely and terrifying.
During this Mother's Day week, so far, I feel so lucky to be her mom; their mom.
To be a mom.
It is the greatest gift I have ever been given and I am so grateful.  I am thinking about all of the other mother's who are hurting this year in a whole new way.  This will be my last big 'first' without my girl and that is just so hard to believe.
I have spent one whole year honoring and worshipping God for the gift of Mable's life; all of it.  I am still humbled that I was part of her remarkable story.  Almost an entire year has gone by since all of my children were in my arms, in my care, in my home.  It seems unimaginable, yet it's true.
I haven't cussed the Lord for almost an entire year.  Instead I have drawn near to Him and rested in His care.  He knew all along how the days of last year would look and I am thankful.
He always knows, and truly He is good.
She was no longer hungry and I was starving for more of Him. He began to nourish us both in the way that only He can, and continues to, even now. Her, eternally and me- until we meet again.
Oh what a God.
Posted by rameelin at 9:46 AM