This is motherhood, too.

This is a post that I wrote 7 months ago and never shared.  Today, just 2 days before the first anniversary of her death, I decided to finally publish.  This is a painful read.  Please do not feel obligated to do so.  But my prayer is that if you do, you feel the true hope of our Savior in our experience and through my words.
----

My youngest daughter Mabel had Batten Disease.
For the first half of her life I searched desperately for that diagnosis.  For the second half of her life, I lived every day knowing she was going to die. 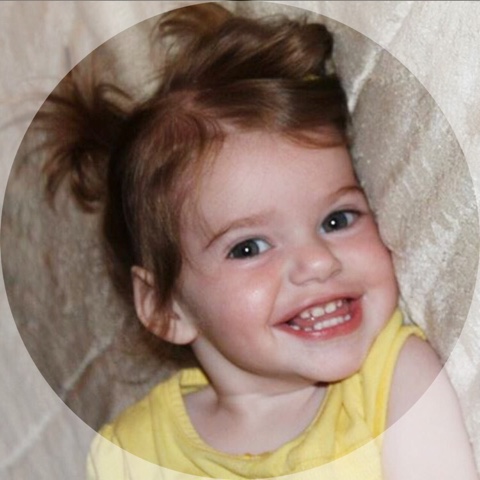 My motherhood experience shifted when Mabel was born just a few short years after her healthy siblings.  Suddenly everything in me was consumed with the need to know what was causing my precious baby to be so sick. She never met a milestone, she couldn't see, she could never gain weight; could barely suck on a bottle to try. She worked incredibly hard in therapy to sit on her own but lost the ability to do so just months after accomplishing the task. She had constant seizures. She didn't talk, crawl, or walk. Batten Disease caused her body to jerk at all times (picture Parkinson's but in a small child; all limbs jerking, all the time). Mabel cried a horrific, inconsolable cry for most days of her life. But she also smiled, laughed, and responded to us in the most pure, and perfect ways.
Essentially Mabel was an almost-5-year-old infant.

Before Mabel's diagnosis, the doctors viewed her simply as 'failure to thrive.'  During this time, I made the decision to have a g-tube placed to help provide nourishment to her body. At the time Mabel was on several seizure medications, all at a very high dose. Night after night I would administer her medications only for her to vomit them back up immediately. The puking never stopped, thus the seizing never stopped. We had no idea at the time that ultimately, because of her disease, none of this would matter anyway.


Twelve weeks prior to my daughter's death, her body began to reject nourishment.
At this point, strangely enough, I wasn't surprised. Mabel's body rejected itself in one way or another many times a day. In fact, her own body was a harm to her. It just so happened that after her diagnosis and after finding out the excruciatingly awful ways in which these children die, I prayed one last bargaining prayer to the Lord,
"I can accept this.  In fact, I do. Thank you for giving me the answers.   My daughter has a disease that is terminal.  There are no treatments, there is no cure and there is absolutely no earthly hope. You have entrusted me with her life and I choose to put my hope in YOU...
I trust you with all of me, Lord...
...Just please don't let her stomach stop working."


I don't know why, but immediately and ultimately I knew that I did not want to have to watch my daughter's body shut down in that way.  At her heaviest she only weighed 19 pounds and I couldn't fathom the thought of her body deteriorating before my very eyes.  I literally said out loud and many times in the quiet alone, "...anything but that, God."

You see, this is motherhood too.
My daughter was on hospice for 2 1/2 years.  We were fully prepared for what was to come.
Yet in the moments leading up to her death, immediately following her death, and every moment since she died, I realized that was never true.
How could that ever be fully true?

Mabel died on May 29th in my arms, in our home, just as we had prepared.
As Mabel's stomach began shutting down in the weeks leading up to her death, exactly in the way I prayed that it wouldn't, I started to search deeper within myself and really began asking God what it was that would be most healing, most private, and most sacred for Mabel's siblings as far as her death was concerned.  It didn't take long before the panic and reality of what was to come consumed me. But in the moments when my thoughts were the most clear, I knew what needed to be done. 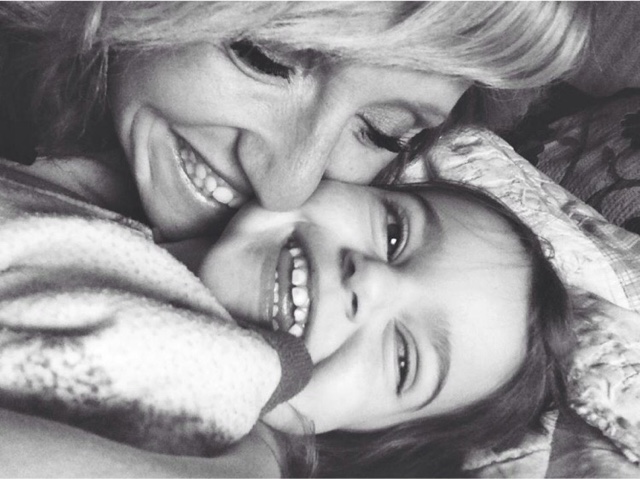 At this point in her life, I very much felt like her death was going to be a more intimate experience than even her birth.  As mothers, we go to such extreme measures to make sure we cover all of the preparation bases when it comes to bringing our children into this world.  We visit the hospital, or prepare the birthing room if we are planning to do so at home.  We contemplate on and pray about who we will want present with us when our child is born.  We intentionally pick out our child's first outfit and plan, plan, plan down to the very last detail so that our expectations of that experience can be met, at least to some degree, as we had hoped.

In this case, I had several years of living [very fully] with my daughter, all while knowing she was going to die.  Indeed, I had time to think on the details of her death and plan for it in the ways that I hoped would make the transition of life without her easiest on all of us, focusing mostly on her sister and brother.

So, before Mabel died, I made the necessary calls to ensure that we would be taking all of the right ethical and legal steps to keep her body at home with us after her death.
If that was the choice I was going to make, after our hospice nurse pronounced her dead, I would be fully responsible for taking care of her body until the time of her burial.  This meant that not only would I have the intimate task of caring for her physical body as I had done every day of her entire life, but that her siblings would be in the comfort and privacy of their own home without the unnecessary voices and noise of onlookers.  They would be able to grieve without the restraint of time and in whatever unique ways were necessary for each of them.

Thinking about those initial hours that were sure to be exhausting, confusing, and devastating for all of us- I knew there was no other way.  And I knew I was more than capable of the task.  Keeping Mabel at home after her death would allow Nora and Braden to have the option of helping in whatever ways that they felt like they could or wanted to when it came to the final care of their sister.

About an hour after my daughter died, and after we had drained her body of all fluids; with shaking hands and a shattered heart, I dressed her one final time.  She wore the sweetest white shirt that she had worn on her 4th birthday.  My sister, Aunt Jeni, bought it for her.  She wore pink leggings, and sunflower socks covered her pink-painted toes.

Midday, the funeral home arrived with the beautiful casket that they had ordered for my very rare, tiny, and very sick daughter.  It was perfect but I remember thinking that I was thankful that they didn't have any others to choose from.  I watched Nora and Braden's faces as they brought it into our home and placed it in her large bedroom; a room that I now know had to be prepared perfectly by the Lord, seeing as we had only moved into this new house just months before Mabel's death.
They understood, we were together, and there was overwhelming, undeniable peace.

When the time came, Chris carried her body from the bed where we watched her writhe, jerk and sleep, to the bed where her body would finally rest forever.

Once there, her older sister combed her hair and placed in it a perfect and delicate yellow bow, made by her Aunt Rachel. Meanwhile, her brother played Legos on the floor beneath her.  He stayed in his pajamas all day and would roam in and out, standing quietly, just looking at his sister.  Nora wandered back several times throughout the day to re-comb and re-adjust Mabel's hair. Later in the afternoon, she also placed a necklace around Mabel's neck, and she continues to wear the matching piece close to her heart. 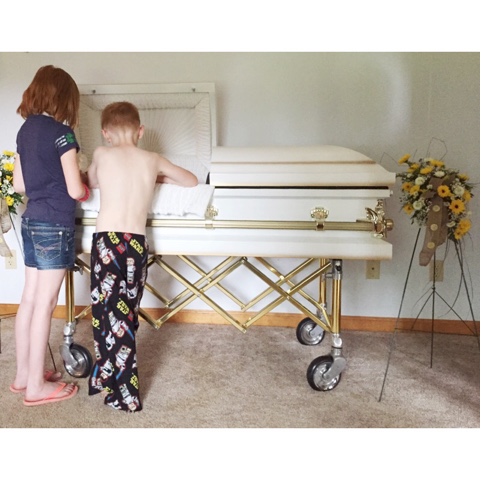 A few hours later, right before dusk, the funeral home came to take our girl to her final resting place.  This was when the decision to keep Mabel at home after her death was solidified in my heart because even in these moments, I hated separating myself from her.  The beauty of it all is that within twelve hours of her dying, we were able to swiftly and privately lay her to rest.
She was never out of my arms and in the care of another.

I know that this isn't the right decision for every family.  It may sound absurd to some or too painful for others.  But for us, it was more than beautiful, more than necessary, more than perfect.  Because I was prepared, took the time to do the research, and asked the right questions, I was able to think about my older (but very young) children and still, in the midst of my grief and pain, nurture and protect them in the ways that they needed during those very critical moments.

It has been five months and I am still incredibly proud of the strength God gave me to carry through with the plan He placed in my heart.  It was excruciating but necessary, and without Him guiding me and enabling me, I would have been helpless.

The time that Nora and Braden got to spend alone, in their home, with their sister after her death is a gift that I know they'll look back and be thankful for.  I'm also thankful that we chose such a non-cultural way to reckon with death because my children and Mabel's tiny loved ones will have a perspective of 'normal' that is different than most but that left them with peace.

Motherhood has always changed me.
But this, this is something that most mother's will never have to do; live out the circle of life with their precious child: birth, life, death.
Motherhood forms me, and floors me all at once.
That is the only thing that has remained the same.
------
For more information on batten disease or to donate in Mabel's honor please visit: www.bdsra.org

I feel so honoured to have read the story of beautiful Mabel's last earthly moments. Thank you for sharing. X

All the best to you and your family! :)